Skip to Content Jump to Main Navigation Skip to Search

You Are Here: Academic Events

The Forgotten in HRI: Incidental encounters with Robots in Public Spaces 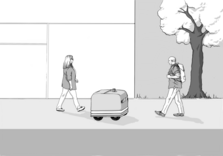 The workshop “The Forgotten in in HRI: Incidental encounters with Robots in Public spaces” was developed by Astrid Rosenthal-von der Pütten, David Sirkin, Anna Abrams, and Laura Platte. It was accepted as a full-day workshop at the International Conference on Human-Robot Interaction 2020, HRI for short, 2020, which unfortunately had to be cancelled in the course of lock downs due to the corona virus. Nonetheless, we want to make the valuable contributions we received as workshops submission available to the HRI community and beyond.

Who are the “Forgotten in HRI”?

As robots are increasingly capable of navigating complex environments, we will soon start to spontaneously encounter them in public spaces. Soon, an increasing number of people could share sidewalks with delivery robots, considerately wait for service robots to carry out their tasks for other people and cross the street as pedestrians in front of robotic vehicles.
In the past 30 years, research in HRI has gained significant insight into how people interact with different kinds of robots in various tasks and settings. However, HRI research needs to develop theories suitable for more diverse and complex social environments. Especially when considering robots in public spaces, many people affected will in fact not be users of robots but will just “happen to be there”.

This group of people will in some scenarios (e.g., delivery robots) even make up the majority of a robot’s encounters. The fact is striking that there is, to the best of our knowledge, not even an established term within HRI research to refer to these incidentally copresent persons. We want to refer to this often-forgotten group as InCoPs (incidentally copresent persons).

We want to thank the authors who have agreed to offer their papers for download on this website. Although a website can never replace presentations and discussions in a workshop, we hope that it can at least spark some ideas on the “Forgotten in HRI”. You can find the contributions below ranging from (I) Concepts, Exploration and Ethnographic Approaches, (II) Laboratory and Virtual Reality Studies as well as technical approaches to (III) Trajectory Planning and Social Collision Avoidance. Click on the title to see the abstract and download the PDF.

(I) Concepts, Exploration and Ethnographic Approaches

Recent developments in robotics are potentially changing the nature of service, and research in human-robot interaction has previously shown that humanoid robots could possibly work in public spaces. We conducted a mixed-method study with the humanoid robot Pepper at a central train station. The results indicate that people are not yet accustomed to talking to robots, and people seem to expect that the robot does not talk, that it is a queue ticket machine, or that one should interact with it by using the tablet on the robot’s chest.

Mobile Robotic Telepresence (MRP) can be used to interact and work remotely while potentially providing a greater sense of presence, and their mobility allows for a greater range of uses compared to traditional videoconferencing. Most uses of telepresence are in public places, such as schools, hospitals, museums, conferences and other workplaces. As such, MRPs are likely to be in the same space as incidentally co-present persons. In order for them to be more widely adopted and effectively used, it is important that those persons are comfortable around the MRP, and able to understand their capabilities and how interact with them. Social etiquette may be a problem, e.g., it may be important that people acknowledge the MRP’s pilot as a person rather than treating it as a machine. People should also understand the mobility limitations of the MRP (e.g. opening doors) and be willing to help when needed. However, research on MRPs interaction with bystanders is lacking. Drawing from past work on bystanders, our position is that they should be included in the definition of users for MRPs and be given the appropriate amount of attention in research. We propose that this topic should be initially studied through ethnographic research complemented with semi-structured interviews, looking at bystanders’ experiences with MRP systems in real world situations.

Autonomous vehicles constantly have encounters with humans who are co-present on the road. Self-driving buses may soon be part of public transport infrastructure, and will frequently interact with pedestrians and cyclists during their rides. We introduce a project with an autonomous electric shuttle bus that connects several buildings on Linköing University’s campus in Sweden. Taking a conversation analysis and ethnomethodology (EMCA) perspective that studies traffic as social interaction, we will first analyse how pedestrians and cyclists coordinate with the bus in an embodied way. In the second stage of the project, we will explore how self-driving buses can communicate their actions in a well-timed and unobtrusive way through sounds and lights. In this workshop paper, we report on initial observations and discuss how these may inform design for incidentally copresent persons.

Humans are implicitly affected by spatial arrangements. From the round table leading us to egalitarian discussions to room partitions that attempt to isolate us, the ways interiors are arranged, divided, instrumented, and outfitted affects our interactions in space. Machines in our environment, meanwhile, may interact with us using explicit gestures. They affect our behavior and perception by using human-like metaphors to communicate with us, giving us an impression of recognition, disagreement, or understanding.

How do implicit and overt influences work together to shape human behavior when first meeting interactive agents in public spaces? We used a paradigm where both forms of influences are embodied: an locomotive and reactive chair. The way chairs are arranged in a room can signal the purpose of the space, and unexpected chair movements can signal their purpose and agency.

We investigated implicit influences by using eyetracking to study perceptual attention of humans in scenes with different arrangements of chairs. We studied overt gestures using human feedback on videos of chair-human interactions. We then placed humans incidentally in a space of unexpectedly interacting chairs in VR, where both arrangement and interactive gestures of chairs affect perception. We found that implicit spatial and explicit gestural factors of chair robots interact with each other in human free-form exploration of a virtual room. This demonstrates a prototyping strategy using hypothetical situations and fine controls that are difficult to realize in real life.

Robots autonomously navigating in public spaces need to use appropriate nonverbal and verbal behaviours to signal their intentions during incidental encounters with bystanders and passersby. We introduce our initial system design concepts regarding social navigation, verbal communication and an avatar face and present our initial experimental observations for robots handling incidental encounters in the  environment of a clinic.

This paper aims to explore the problem of trajectory prediction in heterogeneous pedestrian zones, where social dynamics representation is a big challenge. Proposed is an end-to-end learning framework for prediction accuracy improvement based on an attention mechanism to learn social interaction from multi-factor inputs.

In the domain of Autonomous Navigation of Robots, Trajectory prediction of the surrounding pedestrians becomes essential for reliable Path and Motion planning in a crowded human-centred scenario. Predicting the future trajectory of pedestrian remains a challenging problem due to unknown inherent dynamics, social behaviors and uncertainties in the environment. Of all the different modelling strategies, learning-based algorithms have shown considerable capability as they naturally capture the human behaviors in a crowded scenario. By exploring the past trajectories and optionally the cues from the environment, the future positions of pedestrian trajectory on a pre-defined horizon could be predicted sequentially. In this research, we focus on the question, How to model the human interactions more efficiently to benefit the motion planning of mobile robots? We propose our ideas based on previous work by exploiting Graph theory and Recurrent Neural Networks (RNN).

We focus on motion planning for social robot navigation in crowded environments such as pedestrian scenes. Navigating such environments is a difficult task for a robot mainly due to the lack of concrete rules regulating traffic and the lack of explicit communication among agents. Recent works tend to account for these complications by attempting to reproduce selected social conventions or imitate selected patterns of observed human behavior, yielding only domain-specific performance. Our key insight is that crowd navigation exhibits topological structure, in the sense that the navigation strategies of rational agents in a shared space are coupled. For instance, in a narrow hallway, two agents must either agree on passing from the left or the right side to avoid collisions. Understanding this structure may enable a robot to make principled decisions even in the absence of detailed models of human navigation. Based on this observation, we design a motion planner that leverages topological-level inference rather than detailed trajectory prediction. A physics-inspired metric guides the robot towards actions that comply with the unfolding trajectory topology. Our findings from an online, video-based user study with 180 human subjects illustrate the efficacy of our planner in generating trajectories perceived as intent-expressive by human users. Moreover, evidence extracted from a follow-up in-lab user study with 105 participants suggests that human acceleration is low when navigating in close proximity to an autonomous robot running our planner.

Astrid Rosenthal-von der Pütten is a Full Professor and director of the group Individual and Technology at RWTH Aachen University. Her research interests include social effects of artificial entities, human-robot interaction and linguistic alignment with robots and virtual agents. arvdp@humtec.rwth-aachen.de

David Sirkin is Executive Director for Interaction Design Research at Stanford University’s Center for Design Research, focusing on design methodology, as well as the design of physical interactions between humans and robots, and autonomous vehicles and their interfaces. sirkin@stanford.edu

Anna Abrams is a Research Associate and doctoral candidate at the group Individual and Technology at RWTH Aachen University. Her research interests include group dynamics in human-robot interaction (HRI) under consideration of fundamental social-psychological models and theories, methods of HRI research, and user experience in HRI. anna.abrams@humtec.rwth-aachen.de

Laura Platte is a Research Associate and doctoral candidate at the group Individual and Technology at RWTH Aachen University interested in communicative and linguistic phenomena in human-robot interaction. laura.platte@humtec.rwth-aachen.de